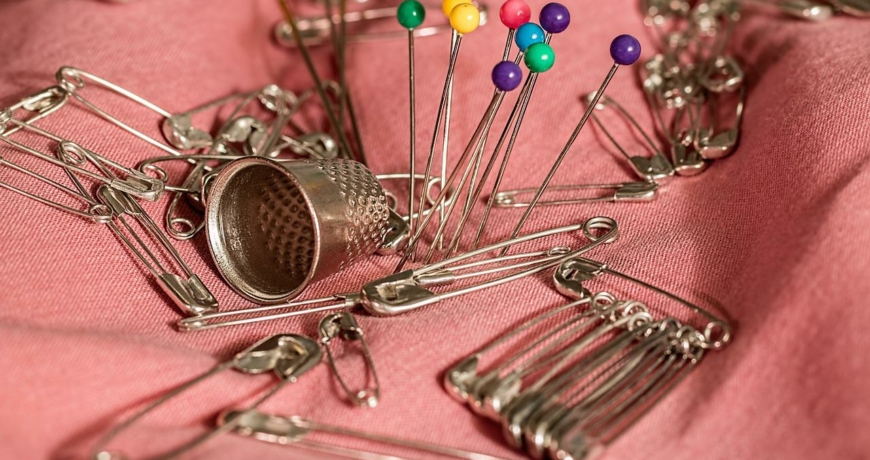 I Am My Mother’s Daughter

I mentioned my mother briefly in a previous post, Adaptation.  She’s not someone I speak of very often because she died very suddenly last November and it’s hard to talk about her without reliving the phone call following her accident.  She died of a traumatic brain injury after stepping off a curb and hitting her head on the pavement.  Her brain hemorrhaged, leaving her in a vegetative state.  I’m still in utter shock.  I don’t know if it will ever feel real.

I think of her every time I write these posts because she contributed to my maker self in so many ways.  Learning how to sew is one of the few crystal-clear memories I have of my childhood.  Mom taught preschool and sewed for other people when I was a toddler.  I remember standing at her elbow while she sewed, watching her stitch pieces of fabric together and listening to the whirr of the sewing machine that still sounds exactly like it did when I was four years old.  Sometimes my younger sister and I played around underneath the sewing desk, which was a huge no-no and usually resulted in being called by our first and middle names to get out from under there.  I don’t know how many times Mom had to re-thread her machine after one of us knocked the knee control with our head.  That clearly did not please her.

I didn’t know how she made the machine work or how any of the pieces fit together, but she could take something that looked like a rumpled mess, push it through a machine that made choo-choo train noises, and pull out a fully finished garment for one of us to try on.  I was captivated.  I wanted to know how it worked and how to do it.

At some point, Mom either got tired of me asking too many questions or she finally figured out I was serious about wanting to sew, or possibly both.  I was about seven years old and the sewing machine sat in a dark corner of our dingy, low-ceilinged basement.  That’s also where the washer and dryer lived and I was often in charge of laundry, so I was well familiar with the austere space and only slightly afraid to be down there by myself.  When Mom was down there with me, the place seemed to transform into a cheerful crafting room with the background track of a whirring sewing machine, scissors clattering onto the sewing desk, and the rattle of the lid back onto her hand-carved wooden pin dish.  It was the only place I ever wanted to be.

I don’t remember exactly when it happened, but I do remember her tone of voice when she finally decided to teach me.  It was a teacher voice, firm and authoritative but kind.  I can still hear her say, “Sit here.  I’m going to teach you.”  It was not so much an invitation as it was a command, which is what made me think I’d been a pest.  I was too excited to care, so I immediately complied.  The machine was already threaded (I wouldn’t be trusted with that task until much later) and she handed me a scrap of fabric folded in half.  She showed me how to push the control lever with my knee under the desk and how to control the speed.  I’m sure she probably also lined up my fabric properly under the presser foot and told me not to go too fast.

Then she stood back and let me try it all by myself.  That’s all it took.  I was hooked.

We were a family of six—two parents and four kids—so we had a large kitchen table.  It was the era of polyester double knit and Mom wanted new tablecloths.  My first real sewing project was hemming two tablecloths and six matching napkins for each of them.  Managing that much heavy yardage is no small feat when you’re barely three feet tall, but I was sewing!  It was thrill!  I probably would have hemmed twenty more if she had asked.

Mom wasn’t always the warmest or happiest person I ever knew, but she lit up any time I mentioned wanting to make something.  She was extremely crafty herself and did other things besides sewing like macrame, wheat weaving, paper quilling, crochet, floral arranging, and probably a myriad of other things I don’t vividly recall.  She often made favors for her sorority chapter or weddings and would solicit help from my sister and me to assemble them.  Making things with Mom was friendly and fun, and it didn’t involve the usual chiding for misbehavior or assignment of chores.

The only thing she loved more than crafting was shopping for fabric, and she usually took us with her.  My earliest memory of going to the fabric stores (she shopped at two local fabric stores) was that one, Calico Corner, had a playroom we inhabited while Mom shopped.  The other one, Missouri Mills, was quite large and had nowhere for children to land, so we’d hide underneath the displays or chase each other up and down the aisles.  Again, this did not particularly please her, but it didn’t ever offend her or anyone else badly enough that we had to leave because of it.  It’s unclear when I began following her around instead of clowning around.

A large chunk of my memory from the age of eight until about the age of eleven is stored somewhere I’ve been unable to access it, most likely because my parents got divorced around that time and both of them were remarried by the time I started seventh grade.  It was probably a tumultuous enough time that my brain is trying to protect me from remembering whatever happened.  Somewhere in there is when I began sewing doll clothes, maybe when I was ten.  I was almost finished with seventh grade when I made my first me-sized clothing.  It was a pair of purple culottes.  Mom helped me lay out the fabric, place the pattern pieces and cut them.  Then she went step-by-step through the instructions with me while I constructed them.  They were absolutely fabulous, and I wore them proudly.  No one believed I’d sewn them myself, but I knew, and that’s all that mattered.

I taught my sister to sew at some point in that timespan, as well.  By the time I was in eighth grade, she and I were hogging the sewing machine and Mom practically had to request time to use it.  We were making tops, capri pants, jackets, skirts, dresses, and doll clothes.  I made my first pair of fly-front trousers (jodhpurs, to be exact) during my freshman year in high school.  Mom walked me through that, too.  Then she taught me how to line a formal gown, insert boning and stitch on horsehair braid.  Despite her apparent distaste for most things teenager related, she never balked at helping me make things and never said no to fabric or craft shopping.  As I got older it was one of the few things we actually agreed on.

Once I was out on my own, our phone conversations and visits were often filled with “what are you working on” and show and tell, early on, at least.  As Mom aged, though, her hands got arthritic and she had back surgery to mitigate profound scoliosis, so it was hard for her to cut or stitch for any length of time.  She had spent years trying to dress a bent body and had all but given up on sewing anything for herself.  When she was finally straight again, she didn’t know how to fit her new frame.  It all had to be terribly frustrating and disheartening.  I tried on several occasions to get her to do a sew-along with me, but to no avail.  I made a few things for her and we still chatted about it, even recently before she died, but I think whatever sewing flame she had left might have already been fully extinguished.

I sat down at her sewing machine after the funeral.  It felt surreal, almost as if I was doing something I shouldn’t have been doing.  Memories came flooding back, all the good ones.  All the things I remember being in the drawers were still there, including the coffee can full of buttons.  I opened it up just like I always had, not being able to resist the urge to inhale that scent I could identify from a mile away…old coffee and old buttons.  (If you’ve ever had a box full of old buttons, you know what smell.)  I picked up her old Gingher scissors and set them down carelessly like she used to after she clipped threads, making that same clattering noise I remember so well.  The sound was like home.  I rifled through the patterns in the basket beside her machine.  Some of them were decades old and probably left over from when I was in high school.  I giggled at the shoulder pads.

I cleared away some of the clutter she had piled on the leaf of her sewing cabinet and there it was.  Her beloved wooden pin dish.

I realized as I sat there just how much of a metaphor that pin dish is for Mom and me.  It contains small objects that hold things together, just like sewing was a small thing that held us together.  I marveled at how many hundreds, possibly thousands, of times her fingers touched that lid and the pins inside and how many times mine did, too.  I wept, realizing I’d never be able to hold her hands again.  But there I was with her pin dish, and that was as close as I’d ever get to her in this world.

Mom’s pin dish now sits on my sewing cabinet.  All its original contents are untouched, but sometimes I take the lid off, look inside, and then gently drop the lid back onto the dish to make that familiar rattling noise in hopes that wherever Mom may be, she hears it and knows I’m thinking of her.