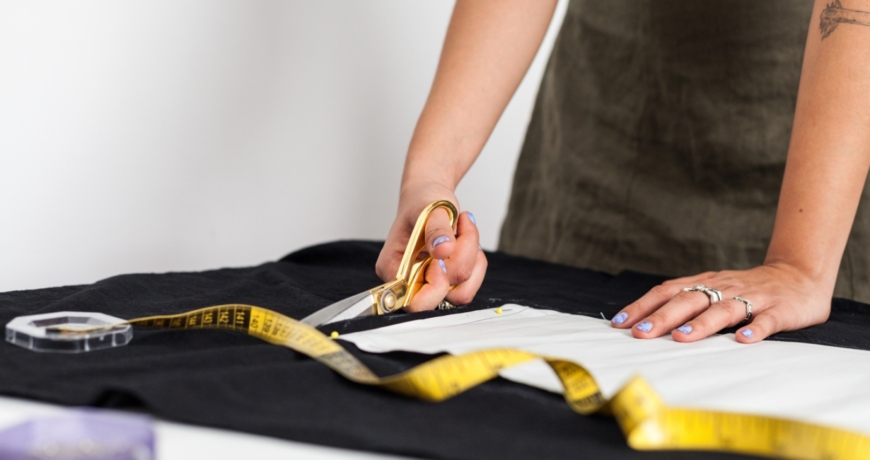 If I asked you what your least favorite part of sewing is, what would you say?  I’ll wager a guess that it’s laying out and cutting.  My students frequently tell me how much they dislike cutting or how bad they think they are at it, or how tedious laying out a pattern is.  This is when I remind them that “sewing” is typically about 90% preparation and 10% stitching.

If we think about sewing like we think about any other skill, what comes to mind is the amount of practice it takes to get really good at it, and masters spend most of their time going through processes and practice that yield only a relatively small amount of “performances.”  A professional basketball player spends years going through drills and taking practice shots to be able to net those 3-pointers consistently at the games they play during each short season.  A ballerina spends years doing barre, combinations, and choreography to be able to dance in a few stage performances each season.  A sous chef spends years boiling, chopping, grilling and sautéing thousands of times before they can lead a kitchen.  It seems funny to me that someone who is relatively new to sewing assumes sewing preparation and practice will be easy.  Like everything else besides blinking, breathing and swallowing, it’s a learned skill, and it takes years to master.

I’ve wondered what it is about laying out and cutting that’s so distressing or off-putting, and the conclusion I keep coming to is that it’s time-consuming and takes skills a person might not yet possess when they’re just starting out.  Laying out a pattern is a skill.  Cutting with scissors is a skill.  These are not things we’re born knowing how to do.  Once we get past grade school, there’s no more construction paper in the curriculum, so unless we help our family clip coupons or cut hair, most of us wouldn’t have occasion to hone that skill.  It can also be scary cutting into that fabric we paid for with our hard-earned money.  I remember one student saying to me, “I’m so terrible at cutting.  It’s really frustrating!”  I gently explained that unless she’s been using scissors in this manner for the past 20 years, it’s going to take some practice before it gets easier or before she’s better at it.  The best way to get better at it is to practice.

Laying out fabric and a pattern is a valuable and learnable skill.  There’s no secret or magic to it, but it’s utterly important to first understand what’s meant by on-grain, selvage, cross-grain, and bias.

Fabric is extremely stretchy across the bias, which can be both an advantage and a disadvantage.  Advantage:  bias-cutting allows a garment to hug the curves of a body, making for lovely blouses, skirts, and dresses.  Disadvantage:  bias-cut pieces must be cut, handled, and stitched very carefully to prevent stretching or distortion.

A pattern will indicate how the pattern pieces need to be laid out on the fabric.  Each pattern piece usually includes a two-ended arrow that indicates the grainline.  This arrow should always be placed parallel to the selvages.  If it’s slightly skewed, your piece won’t hang quite straight.  If you’ve ever purchased a cheap t-shirt from a fast fashion retailer, you’ve probably seen side seams that have twisted toward the front and back of the shirt.  The reason for this is cheap clothing manufacturers skew pattern pieces so more will fit on less fabric.  Because the side seams aren’t cut on-grain, the entire shirt will be skewed.  The same will be true if our own pattern pieces aren’t aligned properly with the grain of the fabric.  When in doubt, measure from the selvage to the grainline arrow at both the top and bottom of the pattern piece.  If the measurements aren’t the same, adjust the pattern piece slightly until they are.

I realize at this point I have an unfair advantage with cutting tools.

My mom let me use metal scissors when I was four years old.  I was cutting fabric with shears at the age of nine and I did Scherenschnitte, which is fancy, lacy paper cutting (Google it to see all the pretties) just for fun during junior high and high school.  Knowing this gives me a great deal of empathy and patience for makers who have not spent their lives wielding sharp objects.  This is precisely why I take the time to teach my students how to cut confidently, whether they’re cutting up a pattern or cutting their fabric.

Here’s one of my most frequent cutting tips:  open the scissors as wide as your hand will allow and cut in one stroke all the way to the tip of the scissors.  Avoid the short chop-chop-chop cutting because it leaves an imprecise, ragged edge that will be hard to align with other pieces or turn under for a hem.  Choppy edges also make keeping a consistent seam allowance rather difficult.

And here’s a cutting practice tip:  draw random shapes, some big and some small, on a piece of paper and practice cutting them out using the long cut method (with paper scissors, of course, not the fabric shears!).  You can also cut shapes out of a coloring book or cut out pattern pieces you know you won’t need.

My best suggestion is to give yourself the necessary time and brain space for laying out and cutting.  Accept that it’s all part of the process and practice of sewing.  Reward yourself when you finish, if it makes you feel better!  And if you get into a groove, cut out more than one project at that time so you can spend the next time stitching.  You can do this—I believe in you!

If you want to build more confidence with laying out and cutting, join me for a lesson or a class!  I offer private sessions (click here to email me for details) as well as classes (click here for upcoming classes).  My instruction is inclusive, safe, judgment-free, and fun!